In catoptric anamorphosis, a curved mirror (usually cylindrical or conical), is used to restore a specially deformed anamorphic picture to its undistorted form. It is an illustrators' trick that gained some popularity in the 17th century Baroque period. As it turns out the same basic principle can be used with modern projection equipment for panoramic video playback.

The use of a cylindrical mirror on still panoramic images was inspired by Iwan Baan. The video-based table was developed as a collaboration with Ianus Keller.

When one puts a cylindrical mirror in the center of a stereographic projection of a panorama (colloqually known as a "little planet"), the reflection shows an image that - in some ways - looks like a normal representation of the original scene; the vertical lines that radiate out from the center of the stereographic view revert to vertical, and the horizon seems to wrap around the cylinder. When looking at the mirror, the effect is surprisingly spatial.

The panamorphosis table began as an informal, non-intrusive way to show panoramic images at an open-air festival. Panoramic still images were placed on bar-tables (with a cylindrical mirror in the center), so people would gather round the table. The tables became instant conversation starters.

After coming to the realisation that the "donut" image create by the 360 One VR panoramic mirror optic produces an image similar in projection to the images used in the original tables, a video version was created. 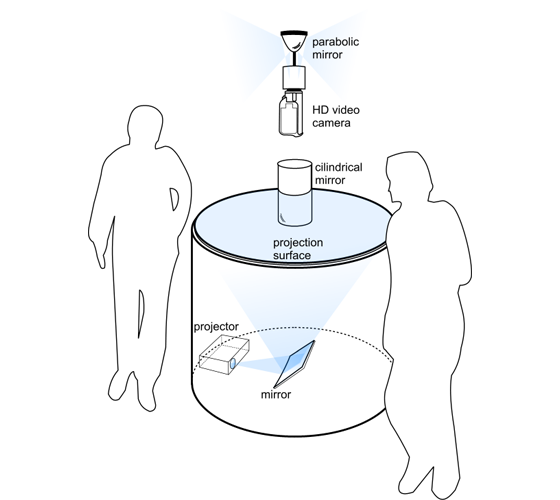 Schematic view of the Panamorphosis Table