Some of my projection installations require quite a bit of image manipulation and calculations to distort the image to achieve the desired affect. Similarly, many popular projection mapping projects have been based on extensive 3d modeling and pre-animated content. The interactive "Impression" series of installations (formerly "Softbox"), in contrast, is based on a simple optical trick, without too fancy image manipulation. Smoke and mirrors (without the smoke). 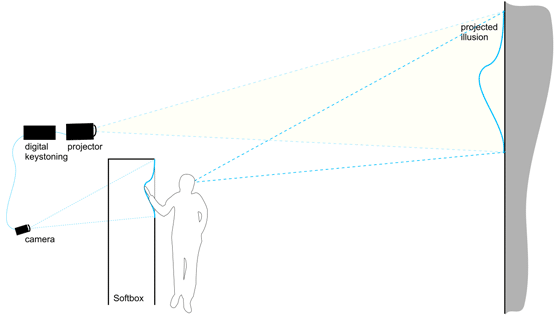 Schematic view of the simplest version of the Impression installation.

In its simplest form, the Impression installation consists of a frame or box, with one of its surfaces covered with a flexible material such as lycra. The audience can deform this surface by pressing objects or bodyparts into the flexible material. The resulting deformation is captured from inside the box and the resulting video is instantly projected onto a wall or ceiling with similar proportions as the Impression surface. Because the angle under which the deformations are captured is chosen to be the same as the angle under which the audience is observing the projected plane, the objects pressed into the deformable surface then appear to be extending from the the wall or ceiling.

One of the fun things to do is to press your face into the surface. But since the result on the wall is instantaneous you cannot see this yourself. You need to bring a friend to tell you how you looked (and to do the same so you can see it too).

For later versions, I have added a mirror to fold the optical path of the camera into the Impression installation make the installation more compact; the camera can now be contained within the Softbox itself instead of being positioned a couple of meters behind the installation. I have also added a secondary projection straight onto the rear of the flexible material. This adds interest to the projected image when the surface is not being deformed, but it also emphasizes the deformations of the surface because of a difference between the projection and camera angle on the flexible surface. This way the softbox effect can be combined with other more traditional videomapping and projection-based augmentation techniques.